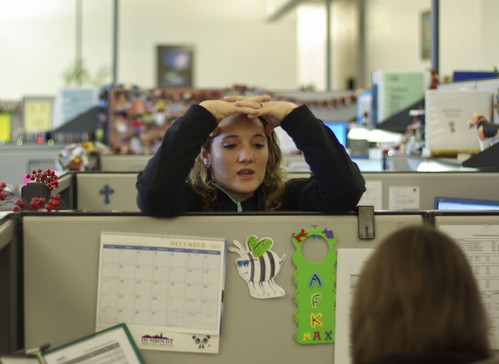 photo credit: Jackal of all trades

Okay, I can finally get to this post on interruptions on work. I’ve meant to do it for months. Now’s the time.

“Hey, Scot,” says my Cube Mate, “did you ever find out the answer to why that chart was so off?”

“Ah, no, we took it down some bunny trails, but never found the real reason.”

“Drats. I’m running into the same problem and I can’t figure out what to do,” Cube Mate says with frustration.

“Sorry.” Okay, I can finally get back t this post on interruptions on work. Now…

“Hey, Scot,” my Boss queries, “can you do me a big favor? I have this emergency du jour from the Big Boss and I really need some help gathering up the numbers for a report I need to do.”

“Sure, boss, when do you need it,” I replied, knowing that your manager is your most important customer.

“Well, Big Boss wants it in the next two hours because he has to present it to the Even Bigger Boss during the lunch hour,” Boss says while looking down at the floor not believing the Big Boss wasn’t more organized than this.

“Oh, well, better get right on it then,” I said, looking at the computer monitor with my new post barely even started.

“Okay,” I say to myself after a couple of hours, “that’s finally done. Now to get back to that important post I was going to do. What was it again? Oh, yeah, that post on work interruptions. Pretty topical, isn’t it!”

“Hey, Scot, how was the weekend anyway? You said you were going Up North — did you end up going anyplace interesting,” says my Happy Hour Buddy stopping in for a quick chat between meetings.

“Sure did. Really enjoyed ourselves too. Hey, I have a bit of work to get to here — how about I catch up with you later?”

“No problem. I really want to hear about the trip. See ya!”

Okay, back to what I was writing about. How was I going to structure the thing again? Where are my notes? I just had them right next to the computer. Argh! I must have put the notes in with the stupid report for the Big Boss. Now where did I put that folder? Oh, yeah, I actually filed it. Can’t stand it when I put something right where it should go. Let’s see…ah! Here they are. Great that the notes for the Big Boss are in the right place. Too bad my notes on the really important post I was going to write aren’t in the right place. Sigh.

Okay, now to get going on this interruption thing.

Riiiing. Damn, it’s Ms. Follow-up on the phone. I’ll bet she wants to know where her information is that I promised her for tomorrow. She never waits for the due date — always calling early. Let’s answer it quick and get it out-of-the-way. “Hello? Oh, hi Ms. Follow-up. Sure, sure, was doing that tomorrow since that’s when you needed it. Oh? Really? Today? Really, today? I suppose I could. Yeah, okay, sure. Okay, by the end of today.”

Well that sure is nuts. Someone else moved up the time frame and now ten people have to rearrange everything and jump through hoops to get this thing done today instead of tomorrow. You’d think I could at least plan out today. Tomorrow can change, but at least you’d think today would be okay. Not….

Okay, well, that took the same hour and a half of time that I thought it would, but at least Ms. Follow-up is happy.

Now…where was I? Oh, yeah, the post on work interruptions. Man, where did the time go? I better look at my calendar and see what’s — oh, crap! I have to pick up my stepson in twenty minutes and then we need to go to his soccer game. I barely have time to get a little organized and shut this thing down. Forgot all about that important appointment — good thing I put it on my calendar.

Okay, so pick up stepson, go to soccer game, then off to home and take care of those honey-do’s.

Now, what was that thing I was going to do today? I know it was something I’ve meant to get to for a while. What was it again? Oh, yeah. Work interruptions. They are pretty bad, aren’t they? I’ll have to get to that tomorrow.

Why Work Sucks – The interview, part 2

Focus your work on the big wins