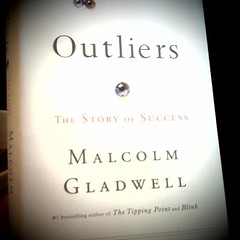 Most of us have heard of Malcolm Gladwell’s other books: The Tipping Point and Blink. Both of them are excellent books and established Malcolm’s pattern for writing: Find studies that tell a story about something commonplace that blows up our assumptions.

“Outliers: The Story of Success” is no different, but the book has implications for knowledge workers. Lots of implications.

The premise of Outliers

And the studies and the approach are riveting; I couldn’t put the (Kindle) down.

The implications for Cubicle Warriors

The first and most fascinating (to me) fact was there seems to be much truth to the “hard work” aspect of becoming successful. It is the “10,000” hour rule. In order to be truly successful in any field, it is not talent, not ability, but hard and purposeful practice. 10,000 hours of purposeful practice, for precision.

Studies of musicians show that the most brilliant in the field purposefully practiced (to get better at their instrument) over 10,000 hours while those that practiced only 3,000 hours became teachers of music.

The Beatles are arguably one of the best bands ever. Their 10,000 hours came because they played in Hamburg, Germany, early on and had to play eight-hour sets. Yes, eight hours, six nights a week for months at a time.

Besides the purposeful practice, opportunities were presented that were taken advantage of by these people. Hamburg was a chance opportunity for the Beatles.

Closer to Cubicle Warrior home, Bill Gates loved to program code and, because of the school he was enrolled and the summer bake sales to support school programs, he happened to have access to one of the very few remote terminals to a mainframe in the country.

Since there was always access at three in the morning, Bill would get up and program away, using his opportunity to build ten thousand hours of purposeful practice.

One of the most fascinating studies is the fact that Asian students are far better at math than their Western counterparts. It turns out that it is not due to talent, but their willingness to work on a problem to solve it much longer than other students. Their persistence pays.

Where does their persistence come from? Most likely from their work in rice paddies over thousands of years. Most Chinese families that farm rice have rice paddies that are no bigger than three hotel rooms. Since they can’t get more land, they have to increase the yield from the field.

On average, they spend over 3,000 hours a year tending this three hotel room size stamp of land working the rice. This compares to Western farmers who spend one third the time in the fields tending Western crops.

This persistence, attention to detail (rice paddies, for example yield more when they are perfectly flat) and focus translates into an overall willingness to spend more time trying to solve problems — like math problems.

Outliers will change your perception about success and how we run stuff. Your view of successful people will change because you can now infer how they became successful — and how you can too.

Outliers isn’t a book about career management. But it will feed your craving for learning about what it really takes to be successful.

The case for a Results Only Work Environment